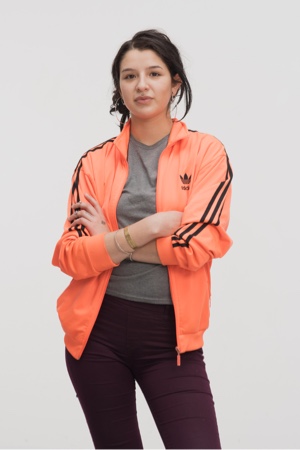 I consider myself a world citizen.

I have a mystical, spiritual part inside of me, which I have not fully discovered yet. It’s a different spirituality than in a typical Polish sense – in Poland it would be considered superstitious. I have never been to Bolivia, and I do not know much about it, nevertheless I feel it is a sign of the Indian roots lurking in me.

I’m also attracted to the aesthetics of kitsch, the accumulation of colors and stimuli. I also consider this as an indirect expression of my Latin American sensitivity.

I am formed of two continents, which I can combine in my own way. 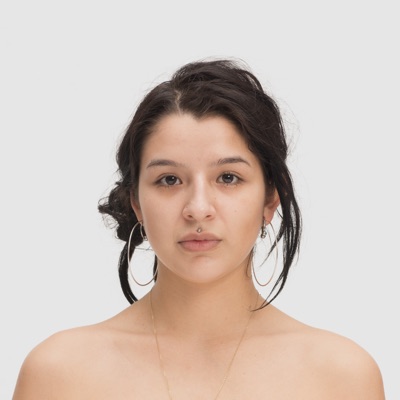 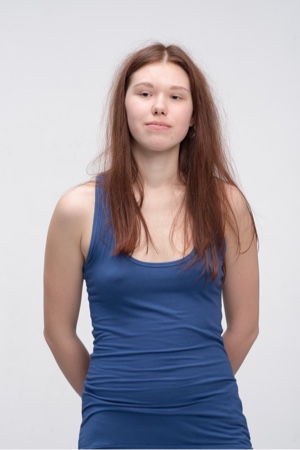 When I act spontaneously, with persistence and defiance.

When I quietly accept the present and the passing of time.

It’s a feeling of incompatibility of a certain kind, and a bit of loneliness too. You don’t feel entirely “uniform, coherent, put together”. 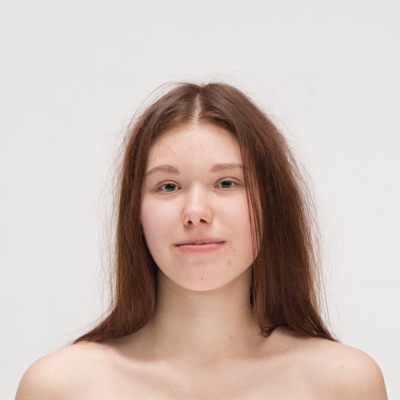 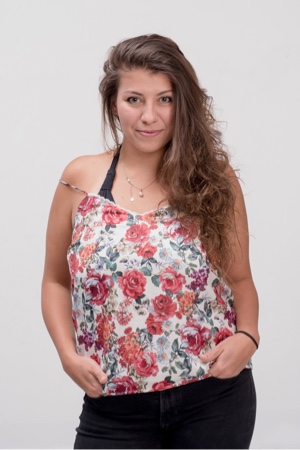 When I tell others about Poland.

I am as Polish as I am Lebanese, irrespective of some political restrictions or antagonisms experienced from people of limited perspective. 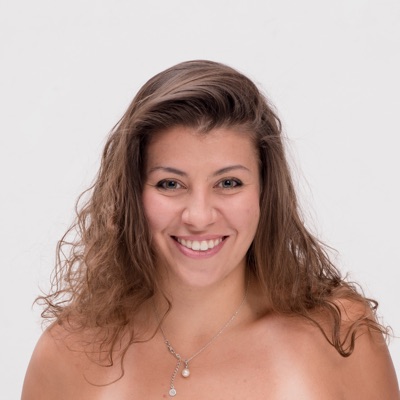 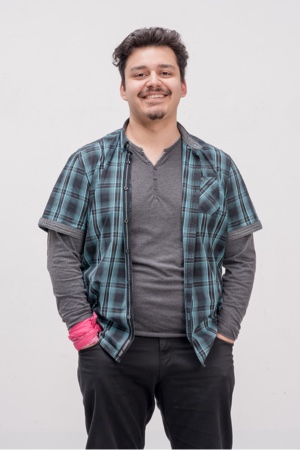 I've got used to being asked “where are you from”?

I think that my process of discovering self-identity started when I met my father at the age of 10. That was when I realized that his looks, the accent, the way he talks – everything showed right away that he's not Polish.

Otherwise, the successes of our national team – I am a huge fan of football, and when Poland got promoted to quarter finals in 2016, I was extremely proud and moved. I don’t react that way to the successes of Ecuador’s team.

Only when I'm around people from Ecuador or half-Ecuadorians and we hang out together, I notice certain behaviour typical for South Americans, something specific only to us, and what perhaps only us can accept.

Unfortunately I'm not fluent in Spanish, which is why I cannot fully feel as an Ecuadorian.

A gift which I’m very grateful for. We are a window into the world for others. Thanks to people of mixed heritage, the world stops being black and white – and starts being simply human.

At the same time, I have a certain emptiness inside me, a hole that begs to be filled. This sounds like something negative, but it’s on the contrary – I consider it as enriching me, it's “something more”, something than non-mixed people can’t have.

I’ve never been to Ecuador, but I already know that once I get there, it will leave a permanent mark on me. 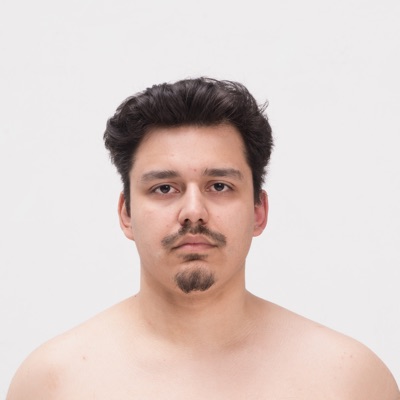 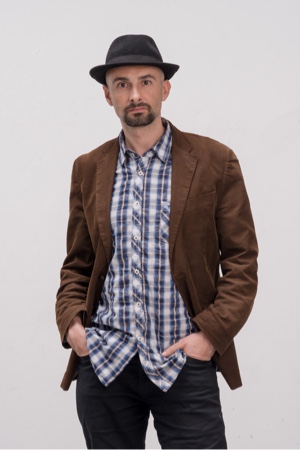 I feel a national pride and that I fully belong – along with all the shortcomings and absurdities, which, despite being troublesome or frustrating at times, I understand and accept.

Above all though, the Polish sense of humor is something I value the most – sassy and peculiar, impossible to be mistaken with any other.

Never. I can say though when I don’t want to feel like one: when I see displays of pure and unforced aggression, fueled by vodka and throwing patriotic slogans around. That is when I would like to stop being a Pole for a while.

Different culinary preferences and smaller resilience for alcohol. There’s also a certain longing – for something different, for a distant land – but these are insignificant details in comparison.

Truth be told, it’s an empty slogan for me, existing in an intellectual sphere, but not reflected in my personality. 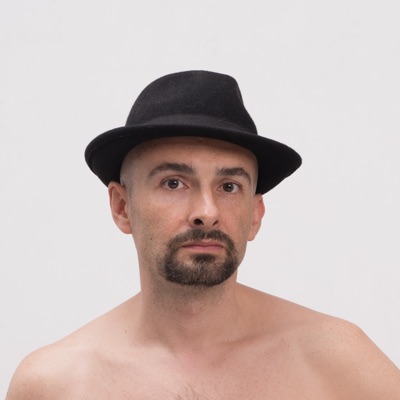 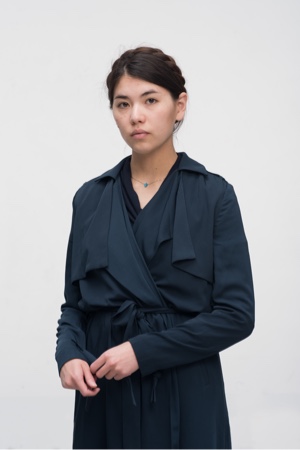 When I listen to Kabaret Starszych Panów (a famous satirical cabaret, running in the 1950s and 60s).

When I’m in the United Kingdom. My personality changes – I don’t feel Japanese nor Polish there.

That you always miss one country or another. 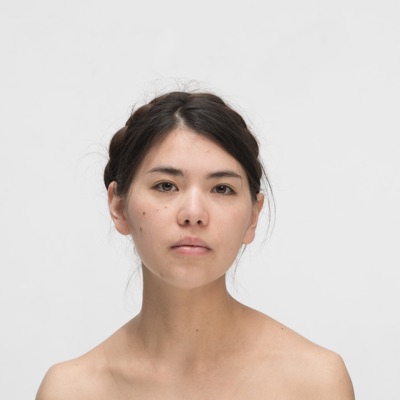 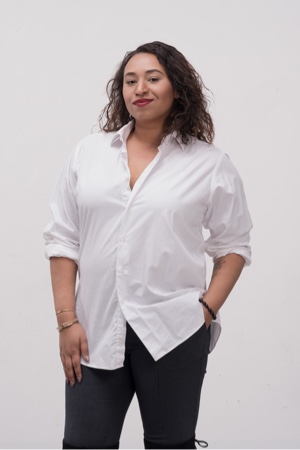 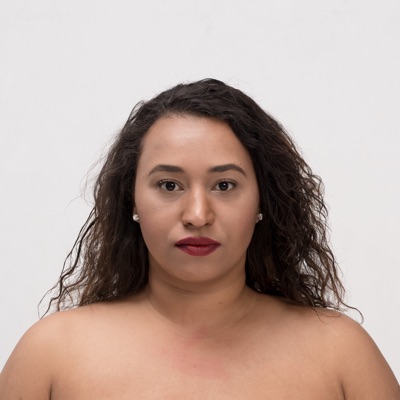 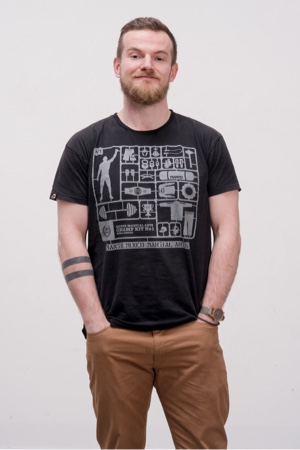 I basically always feel so. I was born in Poland and live here since.

Maybe only when I was younger and I had to prove my uniqueness to everyone around.

A more interesting life! Having an uncommon name has often helped me stand out in a group.

Somewhere deep down, it’s also a burden. Being half Greek, I feel that I should be able to speak Greek fluently and keep in touch with my family in Greece, and that’s not always the case. 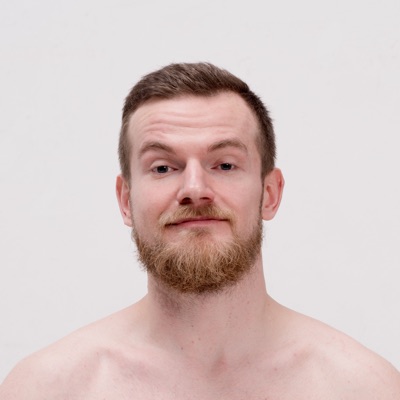 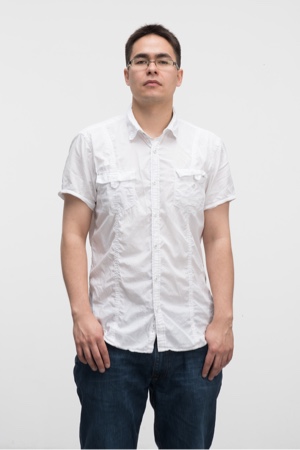 I went to Vietnam three times, but I have little contact with my family there. I also can’t speak Vietnamese.

Me and my father didn’t go along very well, and he represented the whole Vietnam in me, so I never really felt the need to get closer to his heritage.

I don’t feel any particular advantages.

In practice, it just means that a half of my family – close in blood, but distant in any other sense – is a half I have an “obligation” to stay in touch with.

Mixed heritage also means that it will be harder for you to get a job at a national institution. Have you ever seen a black policeman? Or an Asian postman? 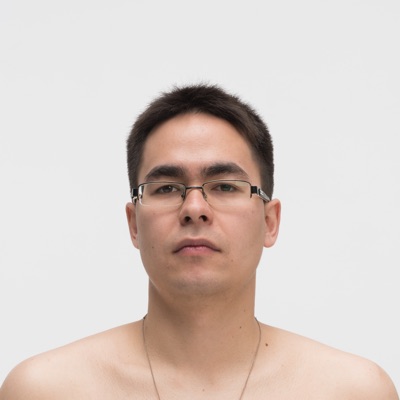 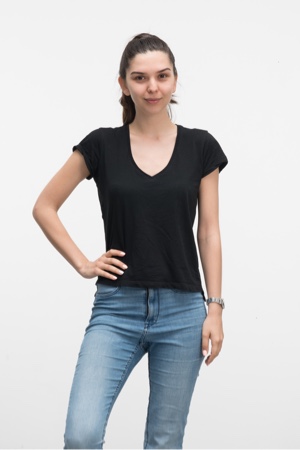 In moments of national pride. When Poles win in a match and we cheer for the team.

When I see intolerance.

Having a broader perspective and questioning stereotypes.

Most people brought up in a single culture don’t have to question the norms, the culture and their beliefs, inherited from their surroundings.

We however have to face it sooner or later, and at a certain stage in our life, find our place inside it. 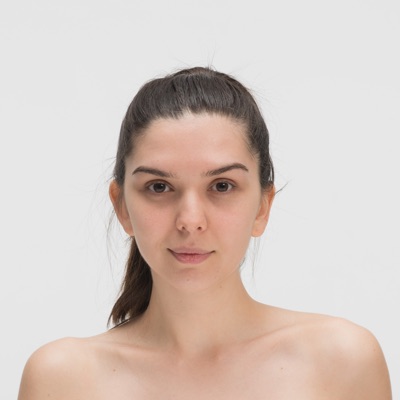 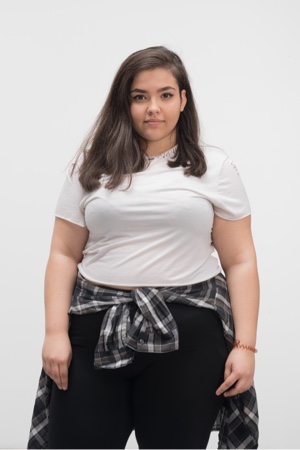 Over the last week, since when I was invited to the studio, I was thinking about it and I couldn’t find a situation like this. Depsite the fact that I have a Polish nationality, I spent 90% of my life here, I cannot say I feel Polish.

One look at me and you can instantly tell. Meanwhile, my mom looks like a typical Slav – light complexion, light hair. My brother too. When I was little, my mom’s friends used to say “what a cute little black girl you have!”, to which I always thought: “why can’t I just be a cute little girl?”

I was heavily bullied at school. I was discriminated by both kids and their parents. Kids can be especially cruel. I’ve heard racist slurs on a daily basis. At the age of 8, I had a phone hung on my neck when I was going out, and I had to report everything to mom afterwards. It wasn’t until later that I found out that she was being called in to my school everyday because of my constant fights.

My brother was experiencing the exact same thing. I saw him getting mugged by classmates more than once. I’m surprised that after all this, he still calls himself Polish. Maybe it’s because he’s older and he better remembers the childhood spent with our grandparents here. I grew up in Greece where we were born. In addition, thanks to his looks, he’s not treated as an outsider right away.

When the terrorist attacks started, I needed to feel reassured by the people around me – that they know I’m not “like them”. Instead, I had to pay even more attention and avoid sensitive topics – like admitting that I’m half Polish, that my parents are separated – because it fueled stereotypical associations in their minds and the need for further explanation (“oh, because he’s Muslim!” No, he’s not).

My brother’s friends didn’t know about my existence or they didn’t know how I looked like. Back then I felt hurt by this. Today however, I think that he could have been protecting himself as well, trying to avoid the uncomfortable questions, the irritating jokes and endless explanations.

When I have to explain to others why I’m not Polish.

The all-time classic question: “Where are you from?” leads to further questions and I know that I’m up to hours of explanations. “But who are you? Why are you here? Why not there?”

When a friend of my friend asks me “How long have you been here?”, after which I get “You speak Polish very well then!”

I visited Palestine only once, and I quickly realized that it’s not my culture.

As a result, I feel neither Polish nor Palestinian.

When I became 18 years old I asked myself exactly that: “Who do I feel I am?”. I realized that I don’t want any labels on me – I don’t want to be called Polish, nor half Palestinian, nor anyone else. I prefer to be just Diana.

A constant struggle – with others and with myself.

A search for solutions and answers. 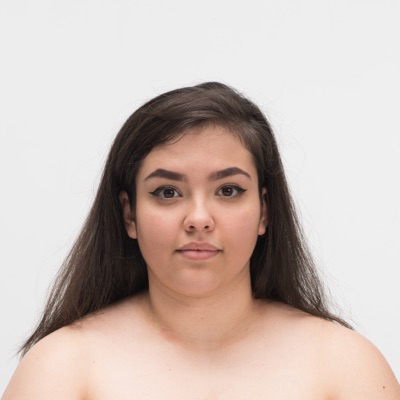 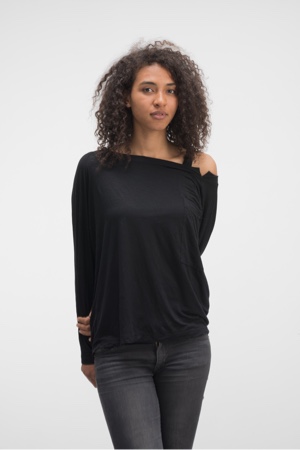 I generally feel Polish, but it’s complicated. Despite being brought up in Polish culture, the foreignness imposed on me by others caused me being felt as put on the outside.

It also probably made me treat the concepts of nations and nationalities with a lot of distance. I prefer to think in local terms.

When friends say “You are more Polish than all of us combined!”. Such a compliment, even if intended as a joke, reveals a hidden, underlying assumption – as if it shouldn’t be that way, as if they expected me to be different.

Poles look hard to find the foreigner in me. Meanwhile, I have a degree in Polish philology and I know “Pan Tadeusz” and other classic works of literature better than many “native” Poles. 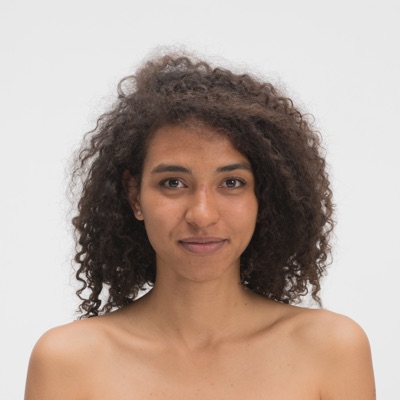 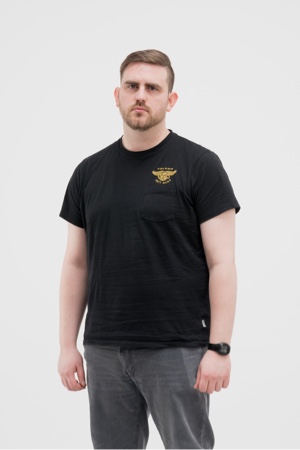 Always. I don’t feel bonded with one nation only, be it Poland, France (where I was born) or Mexico.

I don’t understand the concept of national pride. I didn’t choose the place of my birth – I had zero impact on this. I chose what I’m doing in life, and that’s something that I can be proud of. Of course, you can cultivate the traditions of your own culture – just not at the expense of another.

I never felt like a stranger here. Maybe that's because I live in Warsaw – it’s not necessarily representative for the whole of Poland.

When I was 6 years old, Pope John Paul II came to Mexico. My mom dressed me up in a traditional Polish outfit and taught me a line that I was supposed to recite on a welcoming ceremony. All the journalists were poking fun at me, to which I returned the favor by chasing them around and beat with a rosary.

Many opportunities for seeing a culture from the outside – unbiased by stereotypes or fascinations.

If I was forced to stand for either Mexico or Poland, I’d say that one doesn’t exclude the other. It’s as if you asked: “Do you wear shoes or pants?” 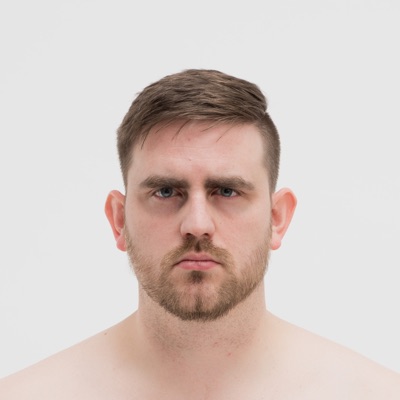 I take portraits of mixed-heritage Poles and ask the same set of questions to each:

3 / What does it mean to you to be of mixed heritage?

You can answer with a single word, a general thought, a particular story or anything in between. You can give multiple answers or even not answer at all.

The questions are intentionally general to avoid underlying bias. My hope is that this will result in a sort of a group portrait of people living in between definitions, in between borders. I hope it will help us see the less obvious sides of being Polish and, just maybe, let us learn something about ourselves in the meantime as well.

The Project is only starting to spin its wheels. I’m looking for people who’d like to join and tell their story.

In this early stage, I’m focusing on “half-Poles” (that is people whose mother or father is Polish). In the future, as the project grows, I plan to expand the scope further.

Take part in the Project